A horror film is a film that seeks to elicit fear. Horror has existed as a film genre for more than a century. The macabre and the supernatural are frequent themes. Horror may also overlap with the fantasy, supernatural fiction, and thriller genres.Main characters are ghosts,  vampires,  werewolves, demons, evil clowns and others.

The first ever horror film is 3-minute short film The Haunted Castle (1896) by Georges Méliès. A devil appears inside a medieval castle and harasses the visitors.

In 1897 George Albert Smith created  The X-Ray Fiend (1897), a horror-comedy that came out two years after x-rays were invented. The film shows a couple of skeletons courting each other. An audience full of people unaccustomed to the idea would have found it frightening and otherworldly.

The 1970s began a new age for horror films, changing it from «classic» to modern horror.  Horror films started to focus more on aggressiveness, violence and artistic qualities. This era of horror films has been named as a «golden age» that transformed the genre by having it «grow up» while showing that horror can be artistic.

One of the best modern-horror films is Annabelle. Annabelle is a 2014 American supernatural horror film directed by John Robert Leonetti. The film is about a doll named Annabelle. John Form has found the perfect gift for his wife, Mia — a beautiful, rare vintage doll in a pure white wedding dress. But Mia’s delight with Annabelle doesn’t last long. On one night, their home is invaded by members of a satanic cult, who violently attack the couple. Spilled blood and terror are not all they leave behind. The cultists have conjured an entity so malevolent that nothing they did will compare with that. 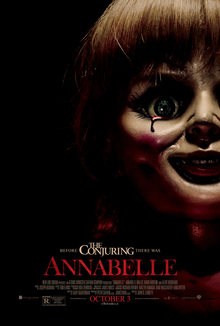 Name the scariest horror film in your opinion.

Which is your favourite film genre? Name one film.